Unfortunately the delivery of the sealant and fuel filter is delayed, but I had some spare time so I decided to clean up the 2nd hand fuel pump coupling as there was almost no paint on it anymore and it had a few rusty spots. I cleaned it with a wire brush, degreased it and gave it a bit of paint of a can I had laying around (RAL 7011) 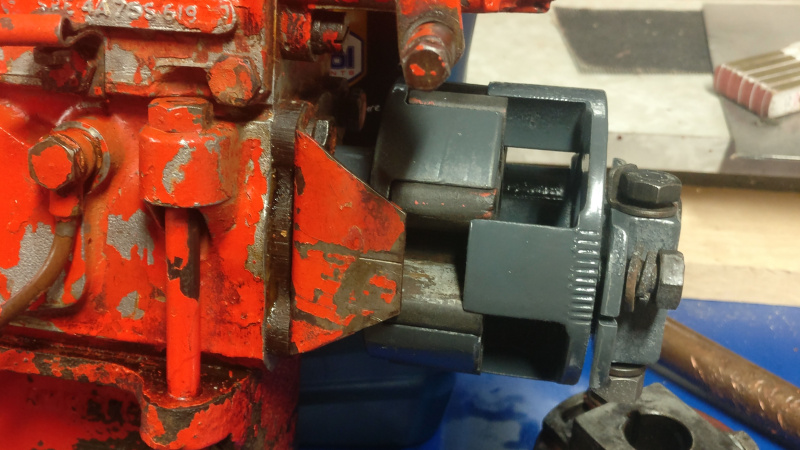 I also took the radiator off and gave it a good rinse. A bit of brownish water came out, but no sludge or anything, so that's also good news.
Then I set the valves, not much explanation needed for that. I can't measure 0,33mm with my feeler gauges, only 0,30 and 0,35, so I set the valves that a 0,30 feeler gauge has no resistance and a 0,35 doesn't fit without pushing too hard.

Hi, You will need to cut the timing pointer back to the edge of the new drive coupling and then spill time the pump and apply new marks. Then time the pump in the normal fashion!

Why is that necessary? The timing mark on the new coupling matches the timing on the old one. (you can't see it in the picture, the mark is behind the timing mark pointer)
1957 Universal Four 4DM
If it ain't broke, fix it until it is!
Top

Because each pump is different, it may be in the same place or it may not!
Top

Thank you for the thorough posts with pictures! I find it very helpful and informative when I can follow along and see what you are working on!
Keep up the good work!!
Top

I'm new to working on tractors, but I have a technical background. Sooner or later someone new will join, knowing as little or even less as I do about these tractors, searching for any information that can be helpful, so I try to keep it informative.

I cleaned up the dynamo today. Didn't do too much work on it as I just want to get it running smoothly with a new bearing. In the future I may be replacing it anyway. I only disassembled it, degreased it, blew it out with compressed air and mounted a new bearing. The shaft is still in quite good condition, but the rear bushing is wearing out. Probably hasn't been oiled in a long time. I didn't test the windings. Like I said: if in time it doesn't work good enough anymore, I won't rebuild it but just replace it with something more modern. 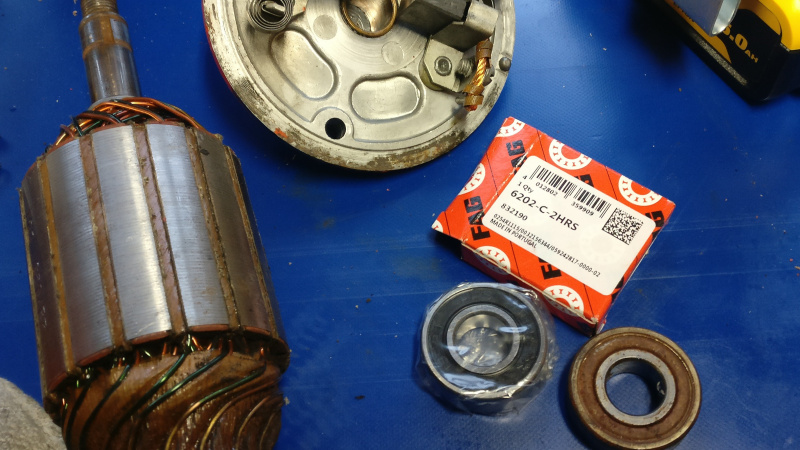 Now it has no more play and runs a lot smoother. Will mount it back in a couple of days and put a new belt on it as well. The belt was still in good condition, but it was the wrong size (10mm wide while it should be 13mm)
1957 Universal Four 4DM
If it ain't broke, fix it until it is!
Top

I found out the engine block doesn't leak. Before putting everything back together I wanted to flush the engine cooling circuit. I screwed in all bolts that held the plate and flushed everything. Then I topped up the radiator and noticed water was only leaking from the bolt holes, not from the welds in the block. So I drained everything, put all the bolts back with a bit of sealant on them and filled everything up again. No leaks! So no need for the silicone and stainless plate... I'll see what happens when the engine gets warm. But to get the engine hot I need to get it running.

Just to be sure I spill timed the injection pump and installed it with the new silent coupling. Set it to 28° BTDC on the compression stroke. Loosened the pipes to the injectors to bleed the system. Turned the starting switch, and the engine cranked only very slowly... Seems like it is struggling to fight compression... Charged the battery, didn't improve, used a 2nd battery as jumper, still the same... Did I do something wrong or did the starter suddenly decide to give up (it started fine a few weeks ago when it was delivered)

Maybe a good idea to remove the starter and check it...
1957 Universal Four 4DM
If it ain't broke, fix it until it is!
Top

Always a good idea to check for voltage drops while the engine is cranking, Remember to check the earthing too by putting your voltmeter between the battery earth terminal (positive or negative as appropriate) and the engine block. Have you disturbed any of the wiring at all?

I only had the ground disconnected at the battery, now everything is back like it was before. The ground wire isn't in very good condition anymore (new one is ordered) but after the first start attempt I took everything off and brushed up all the connections.
1957 Universal Four 4DM
If it ain't broke, fix it until it is!
Top

Turns out is was indeed the electrical connection... Took everything off and installed the new ground wire. I didn't think the positive wire to the starter solenoid was the cause since I didn't touch that one, but it wasn't in very good condition (I think it was the original negative battery connector, stretched to fit the positive battery lead) . So I bought a new battery connector with M10 stud and made a new wire. Found some 50mm² with fine copper leads, crimped on an M10 connector to install to the battery and an M8 to install on the solenoid and to be sure heated up the connectors and put some solder in it as well. Took off the copper connector between the solenoid and starter and cleaned that up (sanded the connections, sanded the washers and nuts)
Turn the key and it started without much hesitation.
It does smoke a bit grey/white, so I'll have to check the timing but it's going the right direction. Oh, and it runs clatter free with the flex coupling instead of the fibre disc coupling 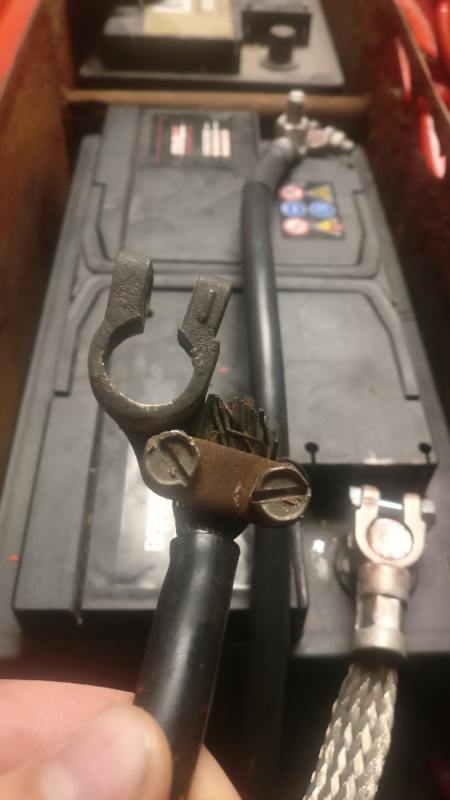 Worked a bit more on it later in the afternoon.
I advanced the timing and now the engine starts immediately and runs smooth without white smoke.
I let the engine idle for about 15 minutes to let it warm up a bit and that unfortunately revealed it isn't completely leak-free. There still is a small hairline crack so I'll have to seal it and put the metal plate back.
Running it without the rocker cover I noticed some exhaust fumes coming up through the pushrods, I think that's probably caused by blowby? I don't really know if or how much is acceptable... So it looks like the engine will need some internal work to be done in the future (or maybe fit another one if I ever find one close enough, would solve the crack too)

Anyone knows how long it usually takes until the radiator bypass hose gets warm? After running 15 minutes the bypass hose didn't feel warm. The needle of the thermometer that is mounted on the thermostat housing only showed about 30°C. The engine felt a lot warmer than that. Or is that normal behavior because the pump doesn't pump very fast through the narrow bypass?
Last edited by Freggel on Sun Dec 08, 2019 11:38 pm, edited 1 time in total.
1957 Universal Four 4DM
If it ain't broke, fix it until it is!
Top
Post Reply
31 posts