Iskra starter for Leyland and Nuffield

Iskra starter for Leyland and Nuffield

Writing up my 4/98 starter story so people out there looking for a good starter have some options. autumn, 2019, my new-to-me Leyland 804 was very slow to crank, especially as the temperature here near Ottawa, Canada began to drop. I went looking for a solution.
You’ve probably seen Professor Cobley’s excellent lecture on the Ford 3000, 4000, 5000 starter’s potential role here. Google montegoson “Making a Nuffield 460 or 10/60 starter” if you haven’t.
Rick’s vid told me that Ford starters would start Nuffields and Leyland.

So, I subscribed to a bunch of Ford tractor Fb groups and asked the blue gurus what the best starter for a Ford 5000 was — something that would work well in cold weather. I didn’t let on that my tractor wasn’t their shade of blue lol.
One guy said, If you really want to wake up your 4-Cyl Ford, put on the planetary gear reduction starter used on the 6640 and other -40 series Fords. Vague, but a good tip.

Mikko sent me measurements showing the Iskra starter is only 1cm longer than the original Lucas D50 starter (pic). Because the Iskra’s gear reduction is planetary, the form-factor is similar to a conventional straight-line starter. I believe it is originally a Bosch design. My local starter rebuilder, Ebenzer-something-or-other, wanted $450 CDN *just before Christmas* Nope.

I found one online at dB electrical for $136USD. After it arrived, I ran a drill bit through the three holes in the nose casting so it would accept the .020 bigger leyland bolts. Didn’t subject it to angle grinding a la Rick Cobley at all.

I also Upgraded from a 2ga battery cable to 0/2 ga cable. I didn’t have a battery cable lug crimper, but following another YouTube yip, I used a brake line flaring tool to make a nice narrow wasp waist on my new copper lug.
The solenoid even clears the Explorer cab on my 804 with about 1/8” to spare.
Lots of space to clear the Cav pump and its fuel lines. Lots of clearance forward to the PS pump.

Now the Leyland leaps to life. I’ve only been using it for about 2 weeks, and this is a Chinese copy so who knows if it will last. But, it’s been a game changer for me so far.
Sorry this was so long - hopefully it will be useful.
Stu — 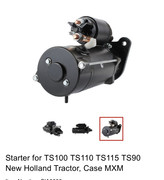 Re: Iskra starter for Leyland and Nuffield

Thanks for the research and excellent post! Copied your post to the Data section for future reference.

Re: Iskra starter for Leyland and Nuffield